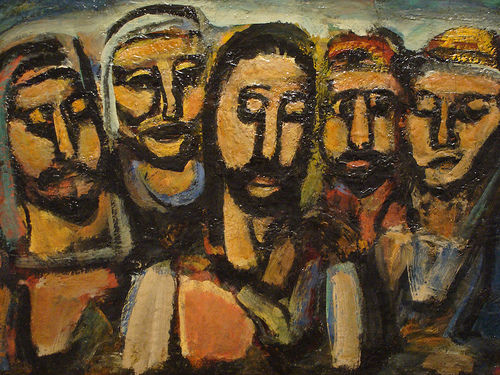 Jesus left that place and came to his hometown, and his disciples followed him. On the sabbath he began to teach in the synagogue, and many who heard him were astounded. They said, “Where did this man get all this? What is this wisdom that has been given to him? What deeds of power are being done by his hands! Is not this the carpenter, the son of Mary and brother of James and Joses and Judas and Simon, and are not his sisters here with us?” And they took offense at him. Then Jesus said to them, “Prophets are not without honor, except in their hometown, and among their own kin, and in their own house.” And he could do no deed of power there, except that he laid his hands on a few sick people and cured them. And he was amazed at their unbelief.

Then he went about among the villages teaching. He called the twelve and began to send them out two by two, and gave them authority over the unclean spirits. He ordered them to take nothing for their journey except a staff; no bread, no bag, no money in their belts; but to wear sandals and not to put on two tunics. He said to them, “Wherever you enter a house, stay there until you leave the place. If any place will not welcome you and they refuse to hear you, as you leave, shake off the dust that is on your feet as a testimony against them.” So they went out and proclaimed that all should repent. They cast out many demons, and anointed with oil many who were sick and cured them.  Mark 6:1-13.

Mark’s Gospel for the Sunday Lectionary offers us several insights into Jesus.  You may remember a couple of weeks back, as the disciples were caught in a terrible storm, they wondered,  “Who then is this, that even the wind and the sea obey him?” Mark 4:41.  Last week, in Chapter 5, we heard a partial answer to that question, in the stories of Jairus’ daughter and the woman who touched Jesus’ cloak.  I think today’s reading may also help us unlock the answer to that question.

Jesus returns to Nazareth, to his hometown.  Teaching at the synagogue, he astonishes the crowd there.  They marvel at his wisdom, his teaching, and at his “deeds of power.”  Like many of us, however, a profound distrust soon overcomes their sense of awe.  They wonder, “How can this be so?  We know Jesus, and we know his family.  He’s just a simple carpenter.”

Often, I think, we lose the irony of Mark’s next phrase.  “And he could do no deed of power there, except that he laid his hands on a few sick people and cured them.”  Most of us would probably find such a miraculous hearing sufficient, if not extraordinary.

Mark does seem to link, however, the occurrence of the miraculous with the community’s ability to trust God, with the community’s faith.  That’s an interesting reversal of the way we often think of miracles.  We sometimes think, “Lord, if you will only (insert something miraculous here), then I’ll be able to believe.”  Mark, however, suggests that miracles are a consequence of faith, rather than a cause of it.  (The theological footing here may not be completely sturdy, in that it suggests that God’s power hinges on us and our belief.  I have serious questions about that view, but Mark seems to suggest it strongly. I’m inclined to suggest an alternate hypothesis:  Our trust in God opens our eyes to the everyday miracles that surround us.)

In the next passage, Jesus continues his ministry, and actively begins the process of the disciples’ formation.  He sends the disciples out in pairs, giving them authority over “unclean spirits.”  He sends them out with only a staff, and no provisions for the journey.  Jesus sent them out to proclaim his message of repentance, and they cured many and cast out demons.  I think this notion of “travelling light” will also help us answer the question “Who then is this, that even the wind and the sea obey him?”

Like their Rabbi, the disciples would not travel with either pomp or plenty.  They travelled, as Jesus did, sharing in the people’s need and vulnerability.  The twelve would learn to abandon the illusion of self-sufficiency.  The disciples would have to learn to trust God’s people, to trust each other, and most importantly, to trust God.  They would learn to be the instruments of grace and faith, and learn to be the music those instruments played.  Through the Incarnation of this Jesus, they would learn what the Kingdom looked like, and learn that God wanted to bridge His separation from mankind.