When Did You Get to Know Me? 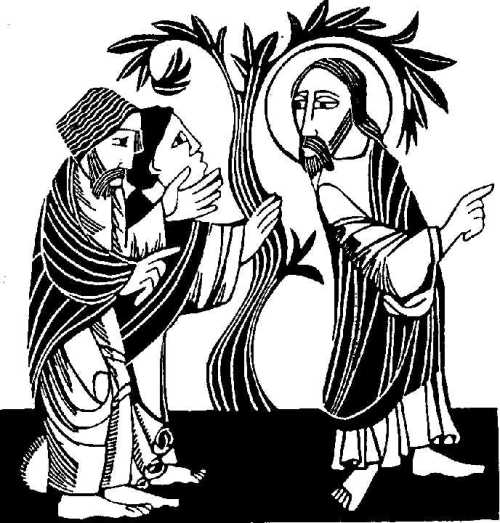 The full readings for today can be found here:

Jesus decided to go to Galilee. He found Philip and said to him, “Follow me.” Now Philip was from Bethsaida, the city of Andrew and Peter. Philip found Nathanael and said to him, “We have found him about whom Moses in the law and also the prophets wrote, Jesus son of Joseph from Nazareth.” Nathanael said to him, “Can anything good come out of Nazareth?” Philip said to him, “Come and see.” When Jesus saw Nathanael coming toward him, he said of him, “Here is truly an Israelite in whom there is no deceit!” Nathanael asked him, “Where did you get to know me?” Jesus answered, “I saw you under the fig tree before Philip called you.” Nathanael replied, “Rabbi, you are the Son of God! You are the King of Israel!” Jesus answered, “Do you believe because I told you that I saw you under the fig tree? You will see greater things than these.” And he said to him, “Very truly, I tell you, you will see heaven opened and the angels of God ascending and descending upon the Son of Man.” John 1:43-51.

When did you get to know me?

In the name of the living God: Father, Son and Holy Spirit.

Several years ago, I travelled to Toronto with my Dominican brothers and sisters for Chapter, our annual gathering. While we were there, I was lucky enough to spend some time at L’Ache, the community founded by Henri Nowen, the great pastoral theologian.
L’Arche is a home for people who face profound mental challenges. While I was there, I met a man named Tom. Tom had Down’s syndrome, but that wasn’t the most important fact about him. You see, Tom was deeply concerned with, one might even argue obsessed with, superheroes. I mean, all of them: Batman, Superman, Spiderman, Ironman, even the Green Lantern.

As I had the chance to talk more with him, I got to see some of his artwork. He showed me one piece that was a little confusing. It portrayed a bearded man wearing what appeared to be a Superman outfit, with his arm around someone who was obviously Tom. I asked him if the other man was Jesus, and he told me that it was. Now, Jesus (or SuperJesus) had his other arm dangling out into space. I asked Tom why Jesus’ arm was just hanging there, and he said, “That’s for you.”

I was gobsmacked. Here was this man, with supposed mental deficits, who had completely grasped a profound theological concept that I had been struggling to live into for years. I asked Tom if there was anything he needed us to pray for, and Tom told me, “I want to be a superhero.” I told him, “Tom, I think you already are, but I’ll pray anyway.”

God is like that. God is sneaky. The divine will jump up and grab you from behind when you weren’t expecting it.

So, in today’s Gospel, we have a wonderful story, a story of calling and wonder and awe. It’s the story of one of my favorite cynics, Nathaniel. But we’ll get to that in just a moment. It’s worth setting the stage.

In the first chapter of John’s Gospel, the day after Jesus is baptized, two of John the Baptist’s disciples ask Jesus where he is staying, or where he abides. He answers them, “Come and see.” That day, Jesus calls Andrew and his brother Simon Peter.

Our reading today takes place the next day, as Jesus is returning from Bethany to Galilee. John tells us that Jesus “found” Phillip. Now, John is a fine poet, and he doesn’t use words lightly. While he regularly contrasts light and darkness, he also contrasts the notion of who is lost and who is found. And if you want an interesting spiritual exercise, try putting your own name in that sentence: Jesus found Nancy, or David, or Rilda or Brad, or James, and said, “Follow me.” Listen for Jesus calling your own name, saying “Follow me.”

Now, Phillip goes to his friend Nathaniel, and tells him about Jesus, describing Jesus in fairly glowing terms. He describes Jesus as fulfilling all the hopes of Israel, the man who Moses and the prophets wrote about: Jesus son of Joseph, of Nazareth. That’s a complex description, and we’ll try and unpack it a bit, but there’s something else worth noting. Phillip says “we found Jesus,” although the text says Jesus “found” Phillip. So I suspect that if Phillip did the finding, it was only in following Jesus that he found Him. And perhaps that’s true of us as well: if we want to find Jesus, we have to follow Him.

In response to Phillip’s assessment of Jesus, Nathaniel asks a poignant question: Can anything good come out of Nazareth? The question may reveal Nathaniel’s understanding of the biblical prophecies: the Messiah wasn’t supposed to come from Nazareth. Or his response may reveal a general disdain for that area. Nazareth was a poor, unimportant, hillside village, and it was no place special. We might as well ask whether anything good can come out of Haiti, or El Salvador, or the poverty-stricken countries of Africa. But I think Nathaniel’s question betrays something more troublesome. I think it’s a question born of cynicism, born of waiting for the Mashiach, the Messiah, waiting for God to make things right. I think that kind of cynicism is usually born out of many disappointments, out of hope that has been smothered, out of the rough tragedy of disappointment. Perhaps it’s a disappointment arising because the word of the Lord was rare in those days, too.

But Phillip answers his friend Nathaniel, echoing Jesus’ response the day before when John’s disciples asked Jesus where he was staying. Phillip tells him: “Come and see.” They are warm words, words of welcome and invitation. And as Nathaniel approaches Jesus, Jesus announces: “Here is truly an Israelite in whom there is no deceit!” There’s a bit of wordplay going on here. You see, before Israel was the name of a country, it was the name of a man, the name of one of Isaac’s two son’s. But Israel wasn’t the name he was born with; that name was given to him after he wrested with God at Peniel. His name at birth was Jacob, which means the deceiver, the usurper.

But in today’s Gospel, Nathaniel comes to recognize a new point where heaven and earth intersect: the person of Jesus. Jesus recognizes Nathaniel: tells him he saw him under the fig tree before Phillip called him. And then Nathaniel recognizes Jesus. He says, “Rabbi, you are the son of God and the King of Israel.” This is Nathaniel’s discovery, his epiphany, his confession. And he reveals himself as a true Israelite, one for whom God’s promises were intended.

Like Samuel in the Old Testament reading, Nathaniel didn’t recognize the divine initially. But God knew Samuel, just as Jesus knew Nathaniel. As the Psalmist says, God created their inmost parts; knit them together in their mother’s womb. And ultimately, they both came to recognize the call of the divine upon their lives.

I’m wondering if we can hear the God calling our names in the dark, calling us from under the fig tree. Because I believe each of us are called to be living icons in which God’s presence in the world is revealed. Regardless of what we do for a living, that’s our vocation. Regardless of how well we know God, God has searched us out and knows us. God “traces our journeys and our resting places.”

Sometimes, when the word of the Lord seems very rare, God sneaks up on us and asks us to share in God’s dreams for the world. God calls to us and says, “Come and see,” or “Follow me.” We may hear God calling to us in a sick friend, a neighbor who’s just lost a child, or a homeless person who’s down on their luck. Like I said, the Almighty is sneaky that way. And God can use many voices: dreams, visions, or a man with Down’s syndrome in a superman tee shirt. Amen.

8 responses to “When Did You Get to Know Me?”