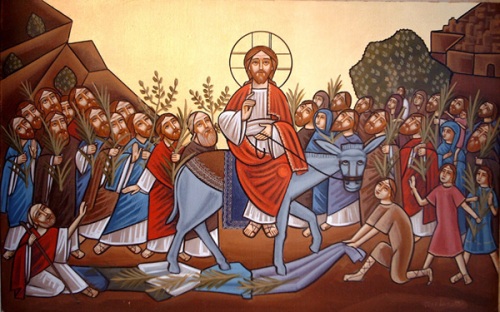 The next day the great crowd that had come to the festival heard that Jesus was coming to Jerusalem. So they took branches of palm trees and went out to meet him, shouting, “Hosanna! Blessed is the one who comes in the name of the Lord– the King of Israel!” Jesus found a young donkey and sat on it; as it is written: “Do not be afraid, daughter of Zion. Look, your king is coming, sitting on a donkey’s colt!” His disciples did not understand these things at first; but when Jesus was glorified, then they remembered that these things had been written of him and had been done to him.  John 12:12-16.

Once Jesus raised Lazarus from the dead, the chief priests and the Pharisees ordered anyone who knew of Jesus’ location to reveal it so that they could arrest him.  John 11:57.  So when Jesus entered into Jerusalem amid all this acclamation, He was already in trouble.  In response to this, He acted provocatively, subversively, and prophetically.  The crowd carried palm branches, perhaps echoing the crowd’s exultation at Simon driving the pagans out of Jerusalem as described in 1 Maccabees 13:49-52.  Historically, the people of God carried palms to celebrate a military victory.

The crowd greeted Jesus with one of the psalms of ascent, saying “Blessed is he who comes in the name of the Lord.”  Psalm 118:26. They proclaimed Jesus as the Messiah, during the festival of the Passover (a celebration of the liberation of God’s chosen people).

As Marcus Borg and John Dominic Crossan have suggested, Pilate may have entered the city  at about the same time, traveling with a legion of combat-hardened Roman soldiers.  Jesus arrived from the east; Pilate approached Jerusalem from the west.  Entering on an ass rather than in a military procession, Jesus may even have intentionally mocked the fanfare of Pilate’s entry into the city.  One didn’t need to be a scholar or a theologian to see trouble coming.

Typical of John’s sense of irony, the crowds announce Jesus as the King of Israel.  While they are right, they don’t understand what they’re saying.  For all the wrong reasons, they proclaim the beginning of a new kingdom.  Ultimately, they will decide that Jesus isn’t the Messiah, or at least that he’s the wrong kind of Messiah.  Jesus signals the nature of his kingdom by riding in on an ass, a humble mount, in sharp contrast with the Roman war horses and chariots.

We have this remarkable image, then, of two parades.  On Palm Sunday, Jesus rides into Jerusalem amid shouts of adulation and triumph.  (You can almost hear the whispers in the crowd:  “Now we’ll show those Romans who’s boss.”)  The crowd shouts “Hosanna”, which probably best translates as “we pray, save us!”  Nothing about this procession would have amused the Romans as the city of Jerusalem swelled to about four times its usual population.

By Friday, Jesus will march in another parade, carrying shame on his back, stumbling toward Golgotha.  While the crowd praises Jesus as their Messiah, only a few days later his cross will bear sign mockingly describing Him as The King of the Jews.  Hindsight and God’s grace alone will permit the disciples to make sense of these two processions.  At the time, their meaning was lost in the din of the crowd’s shouts and jeers.