Six Days Before the Passover 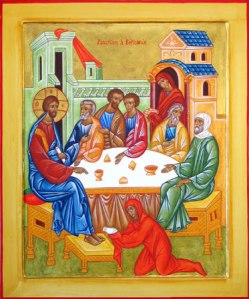 Six days before the Passover Jesus came to Bethany, the home of Lazarus, whom he had raised from the dead. There they gave a dinner for him. Martha served, and Lazarus was one of those at the table with him. Mary took a pound of costly perfume made of pure nard, anointed Jesus’ feet, and wiped them with her hair. The house was filled with the fragrance of the perfume. But Judas Iscariot, one of his disciples (the one who was about to betray him), said, “Why was this perfume not sold for three hundred denarii and the money given to the poor?” (He said this not because he cared about the poor, but because he was a thief; he kept the common purse and used to steal what was put into it.) Jesus said, “Leave her alone. She bought it so that she might keep it for the day of my burial. You always have the poor with you, but you do not always have me.” When the great crowd of the Jews learned that he was there, they came not only because of Jesus but also to see Lazarus, whom he had raised from the dead. So the chief priests planned to put Lazarus to death as well, since it was on account of him that many of the Jews were deserting and were believing in Jesus.  John 12:1-11.

Perhaps Mary of Bethany shows us the only authentic response to Holy Week: she responds with an extravagant love.  At a dinner for the Lord, she acted out of  lavish charity and kindness toward Jesus.  She anointed him for his death, filling the house with this remarkable and extravagant fragrance.  (Scholars report that this perfume would have cost the yearly wages of a laborer.)  I think St. John meant to remind us that following Jesus might sometimes require that we forego counting the cost of loving God.

Mary’s extravagance carries with it the sort of sensuality that would have made the other guests, and almost any good Jew, more than a little uncomfortable.  She anointed Jesus’ feet and wiped them dry with her hair.  No respectable Jewish woman would have behaved this way. Social custom would have limited this sort of affectionate behavior to a woman’s husband or perhaps her family, and even then, only in private.  Mary’s conduct  reflects a profoundly intimate relationship.

In anointing Jesus, Mary prefigures the preparation of His body for burial.  But although  Jesus awaited His death with his friends, the presence of Mary’s brother (Lazarus) reveals that death holds no finality here. Mary anoints Jesus for his burial while he is still living.  Lazarus, who was dead, has joined them for dinner.  We encounter here the intersection of death and life, woven together in a story of reckless mercy, in the context of having a meal together.  St. John teaches us that death will have its say, but not the last word.

John juxtaposes Mary’s remarkable fidelity with Judas’ treason.  Similarly, he contrasts the beauty of the perfume’s scent and this deeply affectionate moment with the ugly brutality of the impending crucifixion in which hatred seems to win the day.  St. John tells us these events took place six days before the Passover.  The timetable echoes with the days of creation, and through his Passion Jesus makes “all things new again”.  Jesus renews all creation through the his death on the Cross, a death by which love conquers fear, hatred and death itself.

6 responses to “Six Days Before the Passover”