If You Choose, You Can Make Me Clean 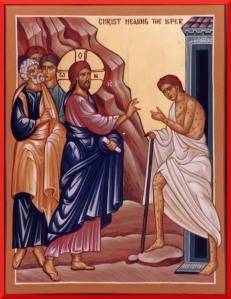 A leper came to Jesus begging him, and kneeling he said to him, “If you choose, you can make me clean.” Moved with pity, Jesus stretched out his hand and touched him, and said to him, “I do choose. Be made clean!” Immediately the leprosy left him, and he was made clean. After sternly warning him he sent him away at once, saying to him, “See that you say nothing to anyone; but go, show yourself to the priest, and offer for your cleansing what Moses commanded, as a testimony to them.” But he went out and began to proclaim it freely, and to spread the word, so that Jesus could no longer go into a town openly, but stayed out in the country; and people came to him from every quarter.  Mark 1:40-45.

At some point in our lives, most of us have experienced the pain, shame and loneliness of being an outsider.  In today’s Gospel reading, we find a man who knew that isolation intimately.  At that time, leprosy and most skin diseases were treated as a kind of plague.  Because of his illness, the community shunned him, and the Mosaic law justified and condoned their fears.  He had no right to approach Jesus, and Jesus had no business having anything to do with him, let alone touching him.

This man lived the life of walking ghost, or perhaps more accurately, a walking corpse. As a leper, this “unclean” man could not enter the Temple; he could not even enter any community other a community of other lepers.  Jesus enters into this ostracism by touching him and sharing in his uncleanness.

This man’s statement (“If you choose, you can make me clean”) carries a number of messages within it.  First, we can hear the pain in the voice of a man who simply doesn’t have the power to help himself.  We also hear a remarkable affirmation of faith in Jesus’ healing power.  And perhaps we also hear just a hint of a challenge to Jesus’ willingness to reach out to this man.

Jesus then tells the man something that God’s been trying to convey throughout the Old Testament:  I choose to heal you.  The text thus illustrates an important idea of divine freedom, reaching out to restore God’s creation.  As He did with Sarah and Abraham, as He did in the Exodus, and as he did on the Cross, God instinctively exercises His freedom to redeem our broken lives.  I think Jesus is telling us:  “This is what the kingdom looks like.”

Mark describes Jesus as “moved with pity”.  The phrase suggests a very deep emotional response, the sort of reaction that you feel deep within your gut.  It has also sometimes been translated as “moved with anger”.  I suspect that Jesus felt a certain anger at all those things which separate men from God, and perhaps at the lack of depth or vision in the priestly interpretation of the holiness code.  Perhaps Jesus was angry  with the very notion, embedded into this man by a life as a lonely outcast, that God would choose anything other than to heal him.

Regardless of whether Jesus was moved with pity or anger, we shouldn’t miss the important point:  His immediate response to this emotion was to reach out, to redeem and to restore.

Jesus then gives this man a strict warning not to tell anyone, but to simply present himself at the temple.  This instruction falls into what theologians call the “Messianic secret.”  In this passage and many others, Jesus often instructs those He heals (and even the demons he casts out) to keep quiet about what they’ve seen.  We get the impression that until the Resurrection (which would clearly reveal the meaning of Christ’s life) Jesus tried to avoid an incomplete understanding of his ministry.

Despite Jesus’ warning, the man begins to proclaim the news about Jesus.  This leads to a curious and ironic reversal.  While the man was originally kept from society, Jesus now finds himself an outsider because of his fame and the press of the crowds.  Cleansed of his disease, the man can now rejoin his town and family.  Having restored this man to his health and freedom,  Jesus could no longer travel freely and had to remain “out in the country” .  Jesus therefore becomes an outsider himself, no longer able to go to the towns and villages.  Even Jesus finds himself marginalized, and thus those who follow him should not be surprised when it happens to us, too.

In one sense, this passage is about risk.  Jesus took a tremendous risk in healing this man, risking contamination.  Jesus also took a risk in asking for this man’s assurance of secrecy, risking his own isolation.  By subjecting Himself to human history and sin, Jesus risked our judgment and condemnation.  In fact, the Gospels point to the final risk of the Incarnation, the Cross.

I think today’s Gospel reading teaches us another important lesson.  Mark illustrates one of the core tenets of the Christian faith:  ours is religion for the last kids picked for dodge ball, the kids no one wants to dance with, and those who always get their hearts broken.  We shouldn’t read this as a story about something that happened once, a long time ago; Jesus still choses to make us clean, to restore us and heal us.  Following Jesus is all about second chances.  It was for this man in today’s Gospel.  And it is for you and me, too.

21 responses to “If You Choose, You Can Make Me Clean”