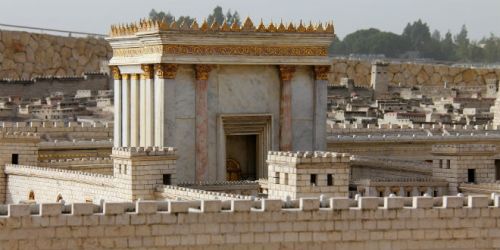 Then Jesus asked him, “Do you see these great buildings? Not one stone will be left here upon another; all will be thrown down.”

In the name of the living God: Who creates, redeems and sustains us.

I think it’s hard for most of us to imagine the Temple in Jesus’ day. It was a magnificent structure, with gleaming white marble pillars. Its exterior walls were about the height of a modern 20 story building. The central structure of the inner Temple glistened with white marble and gold and immense bronze entrance doors. Herod built it to rival the great religious structures around the world. Like all massive building projects, it was a source of economic growth.

I think if you were to ask Jesus how he felt about that Temple he would have been stunningly ambiguous, fiercely equivocal. He could see the beauty of the place, and he knew that for many it was a place of prayer and devotion. And yet, it also was a place that took advantage of the poor, that betrayed widows and orphans, that collaborated with the occupying Romans, and it was also a monument to Herod’s narcissism.

Nevertheless, to predict its destruction, to even speculate about that sort of thing, was bad form. It’s not the kind of thing a nice Jewish boy would talk about. In fact, later in Mark’s gospel, that suggestion would be used as evidence against Jesus in his trial. You see, what Jesus said, well, that’s the kind of thing that could get you killed.

And yet, after one of the many Jewish revolts, around 70 A.D. (around the time Mark was writing his gospel), the Romans marched in and destroyed the Temple. The historian Josephus, who was admittedly prone to exaggeration, says that over a million people were killed. Many others were taken slaves. The Temple was levelled, and fire consumed much of the residential areas in Jerusalem. For the Jewish people, it was a catastrophe. I’m sure they wondered how God could let this happen, whether God cared about them anymore. And not one stone was left upon another.

You know several years ago, I was teaching a class on a Wednesday night at another church here in town. And when I got out of class and went to my car, I checked my phone and there 16 missed calls and several messages from my no-good brother Patrick. I immediately called Patrick and learned that my brother Sean Michael, had taken his own life.

Now my baby brother Sean Michael was one of the bright lights in this world. He was brilliant, with a PhD in environmental chemistry. He had worked as a chemist cleaning up toxic waste sites, and later became a high school chemistry teacher. He was funny, and bright and kind and warm, and had a nasty habit of breaking into show tunes for very little reason. In many ways, he was the best of what my family could offer to the world. And then, he was gone. And not one stone was left upon another. I’ll come back to this in just a moment.

I think many of us have had moments like that, times when our entire world comes crashing down around us, times when not one stone is left upon another. A soldier comes home from the Middle East after multiple deployments. And once the initial celebration ends, his family begins to notice that he’s just not the same person anymore. And their lives begin to unravel. Or a woman meets with the human resources director and learns that her job has been eliminated. And she doesn’t have any idea how she’ll feed her family. And not one stone is left upon another.

Or one more gunman walks into a church and plucks several lives away from a decent, gentle, holy congregation. Or a young couple travel to Texas Children’s Hospital in Houston with their three year old daughter. While there, they receive a terrifying diagnosis. Or a marriage of two people who genuinely loved and cared about each other falls apart. And not one stone is left upon another. So, what are we to do about these events? How do we respond as a church? How do we carry on when not one stone is left upon another?

I think Jesus offers us a bit of a clue in today’s gospel, when he tells us these events, these tragedies, these famines, these moments of devastation, are the “beginnings of the birthpangs.” Something remains to be born out of our pain, out of our loss, out of our devastation, God will bring forth something new.

So, back to that night in 2007 when I learned about my brother’s death. I turned around and went into the church and knelt down in one of the chapels and began to pray. And I wept like a baby. And one of the priests there, to whom I will always be grateful, came into that chapel and knelt down beside me and I noticed that he was crying, too.

So I asked how we deal with those moments when our world falls apart, when not one stone is left upon another. The writer of Hebrews talks about “holding fast to the confession of hope.” We are called to defy terror and oppression and sorrow with hope. It may seem an insufficient weapon when confronted with the blunt force trauma of this world, but Scripture and the Cross assure us that hope is, in the end, insurmountable. The reading from Hebrews continues: “let us consider how to provoke one another to love and good deeds, not neglecting to meet together, as is the habit of some, but encouraging one another, and all the more as you see the Day approaching.” That’s the Church, that’s the real church. Two men, praying and crying in the dark.

In this season of stewardship, we might well ask how we are going to be good stewards of the people God has placed in our lives. Our confession of hope lies in provoking each other to love more intensely, forgive more completely, and challenging each other to care for God’s children more deeply. As Saint Paul said, we can hold fast to what is good, care for each other with profound affection. And they’ll know we are Christians, not by our architecture or our programs or our average Sunday attendance. They’ll know we are Christians by our love. Amen.

9 responses to “Not One Stone”