St. Gregory the Theologian: A Homily 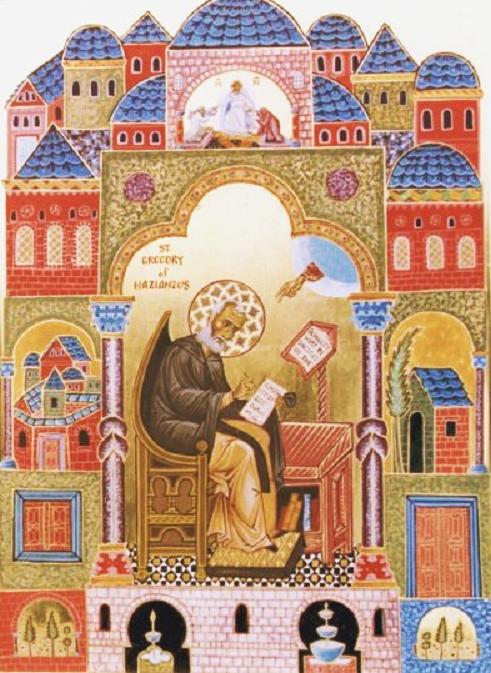 They said to him, ‘Who are you?’ Jesus said to them, ‘Why do I speak to you at all?*26I have much to say about you and much to condemn; but the one who sent me is true, and I declare to the world what I have heard from him.’27They did not understand that he was speaking to them about the Father.28So Jesus said, ‘When you have lifted up the Son of Man, then you will realize that I am he,* and that I do nothing on my own, but I speak these things as the Father instructed me.29And the one who sent me is with me; he has not left me alone, for I always do what is pleasing to him.’30As he was saying these things, many believed in him.

Then Jesus said to the Jews who had believed in him, ‘If you continue in my word, you are truly my disciples;32and you will know the truth, and the truth will make you free.’ John 8:25-32.

In the name of the Living God, Father, Son, and Holy Spirit. Good morning. It’s good to be with you as we celebrate the feast of St. Gregory of Nanzianzus. He was born in modern-day Turkey around the time the Nicene Creed was written , and died in 389. At a time when the church was still struggling with the nature of Christ and the Trinity, he was an eloquent preacher and a deep thinker , earning him the nickname “The Theologian.”  While the church still strove to understand the idea that Jesus could be fully human and fully divine, Gregory wrote this:

As man he was baptized, but he absolved sins as God; he needed no purifying rites himself—his purpose was to hallow water. . . . He hungered—yet he fed thousands. He is indeed “living, heavenly bread.” He thirsted—yet he exclaimed: “Whosoever thirsts, let him come to me and drink.” Indeed he promised that believers would become fountains. He was tired—yet he is the “rest” of the weary and the burdened. . . . He weeps, yet he puts an end to weeping. He asks where Lazarus is laid—he was man; yet he raises Lazarus—he was God. . . . .He is weakened, wounded—yet he cures every disease and every weakness. He is brought up to the tree and nailed to it—yet by the tree of life he restores us. He surrenders his life, yet he has power to take it again. . . . Yes, the veil is rent, for things of heaven are being revealed, rocks split, and dead men have an earlier awakening. He dies, but he brings life into death and by his death destroys death. He is buried, yet he rises again. He goes down to Hades, yet he leads souls up, ascends to heaven, and will come to judge quick and dead.

So, Gregory spent a good deal of time struggling with those who would attempt to distinguish between Jesus and the Father, and those who would attempt to separate Jesus from his humanity. And so we come to today’s Gospel passage. We hear Jesus trying to answer the question, “Who are you?” It may be the most important question we can answer for ourselves.  Jesus answers, “‘the one who sent me is true, and I declare to the world what I have heard from him. They did not understand that he was speaking to them about the Father. So Jesus said, ‘When you have lifted up the Son of Man, then you will realize that I am he.'” Somehow, in the cross, Jesus reveals his divinity: in his mortality, he shows us that death has no more hold on him, or us. The Christ assures us that there isn’t any separation between the Son and the Father, telling us that “the one who sent me is with me; he has not left me alone.” In that same 8th chapter of John’s gospel, Jesus says, “If you knew me, you would know my Father.”

Again, like our friend Gregory, Jesus teaches us that there’s no distinction between the life of the Father and the life revealed to us in the life of Christ. The divine unity of the Trinity cannot be carved up. That’s why in just a few moments we’ll all profess that we believe in One God.

Now for most of us, we really don’t confront very often those who would separate Jesus from the Father or the Spirit. But there are plenty of places, people and things we encounter that would separate Christ—from us. Our work, our hobbies, our distractions, even our families, can get between us and a life in Christ if we’re not careful. They conspire to keep us from the life we were meant for, a life shared with the Father, the Son and the Spirit.

14 responses to “St. Gregory the Theologian: A Homily”