A Cup of Poison 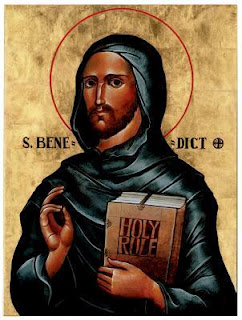 The first monks who tried to live under Benedict’s direction hated his regimen, so much so they plotted to kill their abbot. They put poison in a glass of wine and offered it to Benedict. Before he took it, he blessed it, as was the custom. According to the story told by Pope Gregory I (Benedict’s biographer), when Benedict made the sign of the cross over the wine glass, it shattered, and the wine spilled to the floor.

Benedict, Gregory wrote, “perceived that the glass had in it the drink of death,” called his monks together, said he forgave them, reminded them that he doubted from the beginning whether he was a suitable abbot for them, and concluded, “Go your ways, and seek some other father suitable to your own conditions, for I intend not now to stay any longer amongst you.”

Today is the feast day of St. Benedict of Nursia, who was born in about 480, as the Roman Empire began to crumble.  The son of a Roman nobleman, he left his home and his studies around the age of 20.  He established about a dozen monastic houses, but is most widely known for founding Monte Cassino, an abbey which to this day remains the mother house of the Benedictine Order.  Benedict died around 547, according to legend while standing in prayer to God.

Benedict is sometimes considered the founder of western monasticism.  The effects of the monastic movement, including the Benedictines, has been enormous. Largely as a result of their patience and painstaking labors, the Holy Scriptures were preserved through the Dark Ages.  They contributed greatly to science, literacy, and culture at a time when all of these were threatened.

As I reflect upon the story above, it seems to me to have a deeper meaning than first appears.  There’s nothing unusual about those of us in the religious life experiencing profound frustration, and even anger, with our brothers and sisters.  (I’m glad to report, however,  that I’m unaware of any conspiracy to poison my Prior or any of the leaders of my Order.)  According to legend, as Benedict made the sign of the Cross over the poisoned cup, it shattered.  It seems to me that the Cross has a remarkable way of breaking through anger and resentment, and that may be the point of this story.

Benedict’s response to that poison cup offers us another insight.  He forgave the brother’s responsible.  He teaches us something terribly important:  having been saved by the Cross, we cannot withhold from others the same forgiveness Christ displayed on the Cross.