What Jesus Came to Do 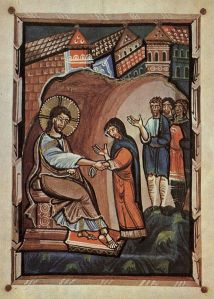 Jesus left the synagogue at Capernaum, and entered the house of Simon and Andrew, with James and John. Now Simon’s mother-in-law was in bed with a fever, and they told him about her at once. He came and took her by the hand and lifted her up. Then the fever left her, and she began to serve them.

That evening, at sundown, they brought to him all who were sick or possessed with demons. And the whole city was gathered around the door. And he cured many who were sick with various diseases, and cast out many demons; and he would not permit the demons to speak, because they knew him.

In the morning, while it was still very dark, he got up and went out to a deserted place, and there he prayed.  And Simon and his companions hunted for him. When they found him, they said to him, “Everyone is searching for you.” He answered, “Let us go on to the neighboring towns, so that I may proclaim the message there also; for that is what I came out to do.” And he went throughout Galilee, proclaiming the message in their synagogues and casting out demons.  Mark 1:29-39.

In the Lectionary reading today, Jesus leaves the synagogue at Capernaum and travels to the home of Peter’s mother-in-law.  She has taken to her bed with a fever, which often presented a life-threatening condition in those days.  Jesus takes her by the hand and lifts her up.  That phrase, “lifted her up” resonates with meaning, calling to mind Jesus being lifted up on the cross and lifted up from the grave.  Jesus restores her to health, and restores her to her community.

We see a pattern begin to emerge in Jesus’ ministry.  The holiness and purity laws of the day would have required that one separate oneself from those who were ill, especially those who were spiritually diseased or who suffered from a moral infection.  Rather than shunning them, Jesus rushed to them.  At the time, this offered a new teaching, something really extraordinary.

That evening, word of Jesus’ healing ministry begins to spread and the house is surrounded by those who need Jesus’ healing touch.  Having had some involvement in the work of pastoral care, this passage from the Gospel rings remarkably true.  Pastoral care is the church’s growth industry in a world that groans in pain and cries out for God’s presence.

Jesus then engages in a practice we’ve seen before, and we’ll see again and again.  Having preached, having healed, he retreats “to a deserted place” and prayed.  Jesus knew what we so often ignore:  even the work of ministry can become empty and debilitating unless we allow the Father to refresh and renew us in prayer. Or perhaps Jesus knew what many of us so often forget: when we’ve come into direct contact with the overwhelming power of God to touch people’s lives, sometimes a bit of silent reflection offers the best and perhaps the only authentic response.

Peter and the disciples then encourage Jesus to return to Capernaum, where everyone is looking for him.  The disciples make the same mistake many of us do when we’ve encountered God doing something wonderful.  They suggest, “Do it again!”    As C.S. Lewis noted,  we are swimming upstream spiritually when we tell God “Encore!”  In Letters to Malcolm, Lewis observed : “It is no good angling for the rich moments. God sometimes seems to speak to us most intimately when he catches us, as it were, off our guard.”  Our fixation with that last event, that former experience, or that past feeling may well divert our attention from the new wonders God is already working.

Jesus tells the disciples that they need to go into “the neighboring towns”, which would have meant leaving the city of Capernaum and going into the countryside.  Here, we again see Jesus engage in a practice that will form a routine for Him:  (1) engage in ministry (proclaiming the Good News and healing the brokenhearted); (2) retreat and refresh in prayer; (3) expand the ministry to another place and people; and (4) repeat.  Those who follow Christ should seriously consider the wisdom of this regime.  It’s what we came here to do, too.

I wish you a good and holy Sabbath,

18 responses to “What Jesus Came to Do”