There Once Was a Man 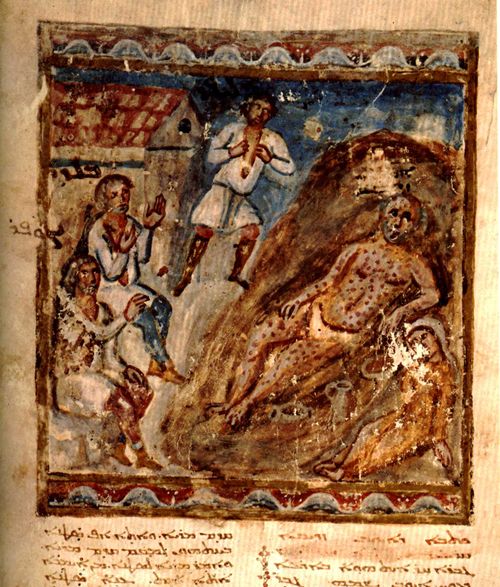 There was once a man in the land of Uz whose name was Job. That man was blameless and upright, one who feared God and turned away from evil.

One day the heavenly beings came to present themselves before the LORD, and Satan also came among them to present himself before the LORD. The LORD said to Satan, “Where have you come from?” Satan answered the LORD, “From going to and fro on the earth, and from walking up and down on it.” The LORD said to Satan, “Have you considered my servant Job? There is no one like him on the earth, a blameless and upright man who fears God and turns away from evil. He still persists in his integrity, although you incited me against him, to destroy him for no reason.” Then Satan answered the LORD, “Skin for skin! All that people have they will give to save their lives. But stretch out your hand now and touch his bone and his flesh, and he will curse you to your face.” The LORD said to Satan, “Very well, he is in your power; only spare his life.”

So Satan went out from the presence of the LORD, and inflicted loathsome sores on Job from the sole of his foot to the crown of his head. Job took a potsherd with which to scrape himself, and sat among the ashes.

Then his wife said to him, “Do you still persist in your integrity? Curse God, and die.” But he said to her, “You speak as any foolish woman would speak. Shall we receive the good at the hand of God, and not receive the bad?” In all this Job did not sin with his lips. Job 1:1; 2:1-10.

In the Old Testament reading, the Lectionary leads us to the Book of Job, a vastly rich and yet deeply challenging selection.  Virginia Woolf once famously said, “I read the book of Job last night. I don’t think God comes out of it well.” I have felt the same way on occasion, but we should remember a number of things as we reflect on this marvelous book.

First, the Book of Job offers us a parable, not a history.  Even the introductory line (“There was once a man in the land of Uz whose name was Job”) sounds a bit like a child’s fairy tale. We also get a hint that this is a parable in the notion the next line, with the notion that Job was “perfectly upright.” Thus, we’re dealing with an archetype here.  Job represents the best of our humanity in a narrative told to teach us a lesson. The parable muses on the theme “Why do the righteous suffer?”

Many of us have wondered why the wicked or the godless prosper, while good people sometimes seem to carry insurmountable burdens.  The Book of Job reflects on the latter issue. Jesus also addressed this issue when He said, “I say to you, Love your enemies and pray for those who persecute you, so that you may be children of your Father in heaven; for he makes his sun rise on the evil and on the good, and sends rain on the righteous and on the unrighteous.”  Matt: 5:44-45.

We should also remember that this book was written sometime between the 6th and 4th centuries before Christ.  By that time, the chosen people had already endured slavery under the Egyptians, the Assyrian exile and the Babylonian exile.  They had seen the destruction of the Temple, which for them constituted the intersection of heaven and earth.  Having suffered through slavery, famine, conquest and separation, they might rightly have wondered: chosen for what, exactly?

So, we have this text before us in which God appears to enter into a wager with Satan.  It’s also important to remember in Hebrew the word Satan isn’t a name; it’s a title or a function.  It meant something like the accuser, the prosecutor, or the adversary. If we read this work as a parable, rather than a history, it might have something to teach us about the kind of accusations that get tossed about when we (either as individuals or as a people) find ourselves engaged in spiritual warfare.  And we might take a little comfort from the idea that God seems to have a remarkable faith in Job’s (and perhaps our) ability to weather life’s storms.

When The Adversary strikes Job down with a hideous disease, and Job’s wife questions his “foolish” commitment to God, Job’s response resounds in our hearts.  He says “Shall we receive the good at the hand of God, and not receive the bad?” That question will echo throughout the rest of the book of Job. Job answers what some have called the Prosperity Gospel, the notion that “good things happen to good people” (and implicitly therefore, bad things happen to bad people).  We still hear the ruminations of that today in modern Christianity, and Job calls it what it is: balderdash.

I hope to come back to Job again soon.  I think the pearl is well worth the dive.  Despite it’s childlike opening, the Book of Job offers us anything but a fairy tale.  The book of Job sets out the struggle of faith, a struggle against faithlessness in the confrontation of pain and anguish. We find Jesus engaged in that same struggle on Golgotha as he cries out “Eli, Eli, lema sabachthani” (My God, My God, why have you forsaken me)? I think, at some time, most of us will find ourselves in that struggle, and we rightly pray to be saved from that time of trial.

6 responses to “There Once Was a Man”