Evidence of Our Inhumanity 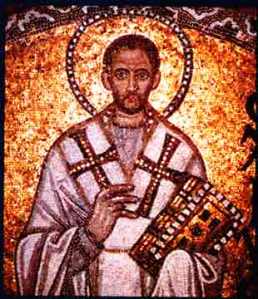 It is folly, it is madness, to fill our wardrobes full of clothes and to regard the indifference a human being, a being made in the image and likeness of God, who is naked, trembling with cold and almost unable to stand.
You say, “But that fellow there is pretending to tremble and not to have any strength.” So what?  If that poor fellow is putting it on, he is doing it because he is trapped between his own wretchedness and your cruelty.  Yes, you are cruel and guilty of inhumanity.  You would not have opened your heart to his destitution without his play-acting.
If it were not for necessity compelling him, why should be behave in such a humiliating way just to get a bit of bread?
The made-up take of a beggar is evidence of your inhumanity.  His prayers, his begging, his complaints, his tears, his wandering all day long round the city did not secure for him the smallest amount to live on.
That perhaps is the reason why he thought of acting a part. But the shame and the blame for his made-up tale falls less on him than on you.
He has in fact a right to be pitied, finding himself in such an abyss of destitution.  You, on the other hand, deserve a thousand punishments for having brought him to such humiliation.
John Chrysostom, On the First Letter to the Corinthians, 21, 5.

I found this passage in today’s reading from Drinking from the Hidden Fountain: a Patristic Breviary.  The passage is taken from St. John Chrysostom, the Archbishop of Constantinople who lived from around 347 through 407 A.D. He was a marvelous preacher and public speaker, who was given the nickname chrysostomos, meaning “golden mouthed.” He regularly spoke out against the abuse of authority by both political and church leaders. Because of this, he was arrested, exiled and banished several times.

In today’s reading, St. Chrysostom criticizes our lack of charity, our lack of concern and love for the poor among us.  He characterizes this as “madness.” He teaches that our treatment of the poor, our indifference toward them, reflects an indifference toward God. While our wardrobes are full, we ignore these images of God who are naked and shivering in the cold.

Regarding the suggestion that the poor might be exaggerating their plight, Chrysostom turns that argument back on us.  He suggests that the poor would not do so but for our cold-heartedness.  (We still hear a related version of this suggestion today: that the poor do not merit our help because they are lazy or comfortable and have chosen their life.) St. Chrysostom responds that it’s unlikely that people voluntarily chose to surrender their dignity.  More likely, he says, any exaggeration is simply meant to overcome our natural indifference.

On occasion, I’m at the my church kind of late.  Now and then, someone will come in asking for money.  I have to admit that I sometimes confront a voice in my head that says, “You’re being played for a sucker here.”  But I think St. Chrysostom would remind me that even if that’s true, that’s none of my affair.  That’s between them and God.  The choice before me, rather, is whether I want to overcome that skepticism with charity.  I hope I’m willing to run the risk that, when I die, someone might write in my obituary that I sometimes loved foolishly. I hope you are willing to take that risk too.

19 responses to “Evidence of Our Inhumanity”