To Whom Can We Go? 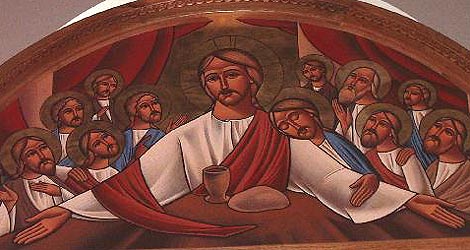 Jesus said, “Those who eat my flesh and drink my blood abide in me, and I in them. Just as the living Father sent me, and I live because of the Father, so whoever eats me will live because of me. This is the bread that came down from heaven, not like that which your ancestors ate, and they died. But the one who eats this bread will live forever.” He said these things while he was teaching in the synagogue at Capernaum.

When many of his disciples heard it, they said, “This teaching is difficult; who can accept it?” But Jesus, being aware that his disciples were complaining about it, said to them, “Does this offend you? Then what if you were to see the Son of Man ascending to where he was before? It is the spirit that gives life; the flesh is useless. The words that I have spoken to you are spirit and life. But among you there are some who do not believe.” For Jesus knew from the first who were the ones that did not believe, and who was the one that would betray him. And he said, “For this reason I have told you that no one can come to me unless it is granted by the Father.”

Because of this many of his disciples turned back and no longer went about with him. So Jesus asked the twelve, “Do you also wish to go away?” Simon Peter answered him, “Lord, to whom can we go? You have the words of eternal life. We have come to believe and know that you are the Holy One of God.” John 6:56-69.

The Lectionary brings us now to the final and critical passage from the sixth chapter of John’s Gospel. To place it in context, Jesus has fed the five thousand, has walked on water, and now tries to teach the crowd about his flesh and blood as the road to eternal life.  That message does not go over so well.

John reports that many in the crowd could not accept this “difficult” teaching. Even some of his disciples muttered and complained.  As we hear about the disciples grumbling about this teaching, we hear the echo of God’s people grumbling about bread in the wilderness during the Exodus.  Jesus knew the crowd found His teaching offensive; his words were scandalous and incendiary, and the crowd began to turn away.

We shouldn’t judge those who turned away too harshly; Jesus’ teachings ran contrary to scripture. Leviticus clearly instructed, “If anyone of the house of Israel or of the aliens who reside among them eats any blood, I will set my face against that person who eats blood, and will cut that person off from the people.” Lev. 17:10.  We find the same prohibition in the Book of Genesis:  “Every moving thing that lives shall be food for you; and just as I gave you the green plants, I give you everything. Only, you shall not eat flesh with its life, that is, its blood.” Genesis 9:3-4.

Leviticus reveals the reasons for this prohibition: For the life of every creature—its blood is its life; therefore I have said to the people of Israel: You shall not eat the blood of any creature, for the life of every creature is its blood; whoever eats it shall be cut off. Lev. 17: 14. Moreover, this is one of the “I Am” passages in John’s gospel in which Jesus identifies himself with YHWH (“I am who am”). Thus, the crowd would have struggled with Jesus’ teaching on several levels.

Jesus instructs the crowd to consider the ways of heaven, and turn away from their focus on the ways of this world. He tells them, “It is the spirit that gives life; the flesh is useless. The words that I have spoken to you are spirit and life.” Scripture taught them not to eat blood because it contained the essence of life.  Jesus tells us that He wants His very life coursing though our veins, through our lives. His spirit will become our food, the life force animating and running through us.

Now we reach the climax, the fulcrum upon which the entire sixth chapter of John (in which we’ve spent several weeks) turns. Jesus turns to the Twelve and asks them, “Are you going to leave me, too?”  And Peter (stumbling, clumsy Peter) responds, “Lord, to whom can we go? You have the words of eternal life. We have come to believe and know that you are the Holy One of God.” Peter’s answer, in one sense, is heartbreaking:  “Where else are we going to go?”  It’s a question we sometimes ask ourselves as we confront the heartbreaking moments in our lives.

The disciples have come to that remarkable point at which there’s really no turning back for them.  Wherever Jesus is going, no matter how difficult, that’s their path as well. Whatever they’ve found in Jesus is beyond this world, beyond the Temple, and yes, beyond “religion”. They are coloring outside the lines now, because the life of Christ has begun to run through them.

In the past, I’ve written about the tremendous mystery of Jesus’ presence in the Eucharist.  In this passage, we see the Twelve drawn into perhaps the greatest mystery of all: God’s deep and abiding love for us. I pray that we will all be drawn by the Father into that mystery, until the life of the Holy One flows in and through us.